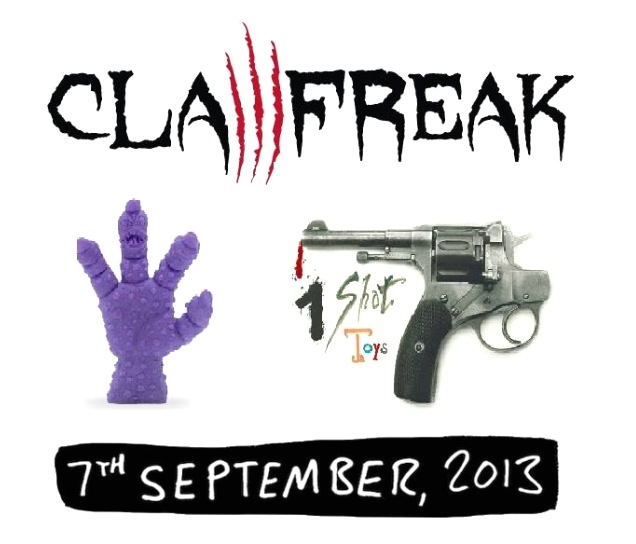 Eric Villanueva over at 1Shot Toys has been cooking up a whole host of projects over the past few months, so it came with great pleasure this week to find out that ALL of them will be available in one “Mega Drop” this Saturday, September 7th! Featuring a slew of original figures, glyos heads and customs, we bring you the full lowdown of what’ll be on offer in the 1Shot Toys store come launch time…

Clawmania// A collaboration with Clawfreak, this new custom series features recasts of the iconic M.U.S.C.L.E Claw from Eric, lavished with either paint or Monster Kolor dye by the mini figure customiser. Priced at $17 each, these will be sold individually (not bling bagged), so be sure to get in quick to bag your favourite!

War Pug Battle Beasts// Shrinking the original War Pug head down to mini figure size, Eric has cast up a batch of super-limited custom bootleg Battle Beasts! Cast in a mixture of semi-translucent GITD resins (with one UV chase!), the 2″ figures have been priced at $15 each.

War Pug Glyos Heads// Joining the custom Battle Beasts, Eric will also be unleashing the latest batch of normal-sized War Pug Glyos heads! Cast in a mix of pearl orange and pink resins, these will be available for $13 each.

Snack Attack: Sgt Angus// Following preview releases at both CT&TC and Wonder Festival, Snack Attack’s debut figure, Sgt Angus, finally makes his official debut! Sculpted by Eric and cast in a keshi-style rubber by our very own Tru:Tek, the figure will be available blind bag (in either flesh, orange or red/yellow) for just $15 each. Stay tuned for a closer look at these little guys later in the week!